Everyone Needs a Cuzzin’ Gina ~ Who is Yours?

Posted on February 16, 2012 by stuffitellmysister

Everyone needs a Cuzzin’ Gina in their life.  She made my life lively when we were young and she still does today!  (If you read Faye’s story earlier in the week about her sister, Jo and the wedding rings, well Gina is Jo’s daughter, nuff said!  lol)  For a short time, my family lived in Duncan, Oklahoma, where Gina’s family lived.  That summer we were at Aunt Jo’s house and someone decided it would be a good idea for “the girls” to have a tea party in the back yard.  We spread our blanket on the ground.  There was our pitcher of iced tea and our glasses. It was just the three girl cousins ~ Renae, Gina and Paula ~ our tea poured, we commenced to visit.  Somewhere in the visit, Gina called me a “not nice” name.  I was only six, but had some spunk in me (that often got me in trouble) and I immediately took my glass of tea and with no thought of consequences, threw it on my cousin Gina.  Of course, Gina had that same mindset, and in about two seconds, I was doused with her glass of ice tea. Before either of us had a chance to further our fight, Renae grabbed the big pitcher of ice tea, and  stepped WAY out of “hit” range.  Ammo now removed, our mother’s became involved.  Our tea party had ended.

Two years ago, we had that tea party again.  This time it was in Colorado on a “girl’s trip”.  During our game of Farkle, the tea fight subject popped up in the conversation.  We didn’t throw our tea this time.  Instead, while we were all laughing our heads off. I told Gina what word she called me.  She didn’t remember, but told me that wasn’t nice of her and that she was sorry.  I was never angry about it (other than when I was six! ha!) and it’s been such a funny memory to share through the years.  I still like to, on occasion, send Gina teabags in the mail ~ 😉 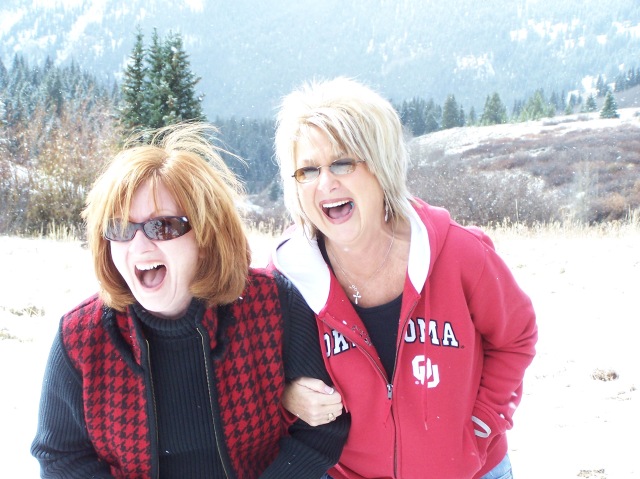 Renae (my sister) and Cuzzin’ Gina

Our Grandma and Grandpa Warren lived in a country farmhouse in Marlow, Oklahoma.  With eight children and a bazillions grandkids, you could always count on some fun when you went to the farm.  One Spring Sunday, many of us were gathered there and several of the cousins ended up at the barn, a little ways from the house.  Renae and Gina decided to explore the hayloft.  Grandpa had conveniently left the ladder leaning against the barn, so they started up!  I (Paula) was always a big chicken and wouldn’t follow.   I watched my brave cousin and sister climb the ladder.  Once they were settled into the hayloft, Gina decided to create a bit of excitement and gave the ladder a push.  It came back.  She did it again, a little harder.  (Lots of giggles and laughter.)  It came back again.  Renae is telling her to stop now, or they will be stranded.  You don’t tell a Warren NOT to do something!  Gina pushed the ladder even harder this time around, and as you guessed it, this time the ladder did not return.  It fell straight back and to the ground.  Now there was even MORE laughter added to screaming for HELP.  Eventually, I think it may have been Grandpa that came out to let the girls out the loft.  I’m not sure what he was saying to himself as he was walking that way, but I think his walk was purposely slow, hoping to teach a lesson. 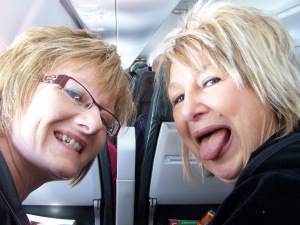 Everyone needs a Cuzzin’ Gina in their life to challenge them, make them laugh more than they have ever laughed and to feel loved.  Who is your Cuzzin’ Gina? ♥♥♥

This entry was posted in Uncategorized and tagged cousins, Everyone Needs a Cuzzin' Gina, tea party. Bookmark the permalink.

6 Responses to Everyone Needs a Cuzzin’ Gina ~ Who is Yours?