What Do You Want for Christmas?

Posted on December 1, 2013 by stuffitellmysister

Since I posted yesterday….and didn’t even KNOW it….I thought today I would do so willingly. 🙂  One set of kids came through in route home yesterday.  As we were driving to see hubby at his store…..we spotted Santa in his workshop!  I was driving, so decided we should probably have a little visit with him.  Dragging my reluctant adult children….Santa and his helpers were not quite certain what to think of the trio of “big” kids.  As I sat “lightly” on his knee, his helper reassured me not to worry about it hurting him, claiming ~It’s a new knee, it should hold ~ Well that was reassuring! 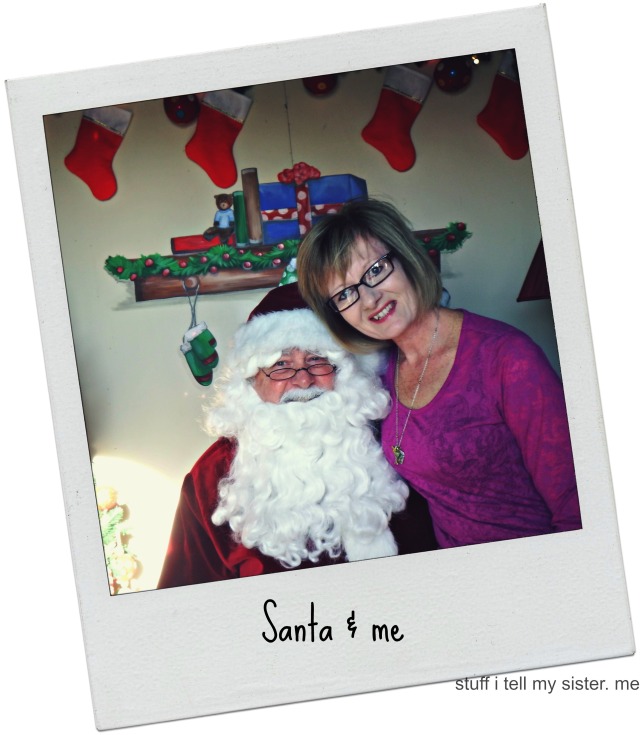 This Santa seemed rather bashful, again, it may have been the present company, but he did ask the expected question, ~ What would you like for Christmas?  To which I replied ~My husband, at home. He shook his head as if to understand.  I know he didn’t, but perhaps the real Santa does.

So here’s hoping that you get to have a visit with Santa sometime this month.  Now I turn the question to you….If but one thing….what would you ask for?

This entry was posted in Christmas, Curiosity, Family, Oklahoma, Relationships and tagged Christmas with santa, December, Santa wishes, What do you want for Christmas?, Wishes, worked to death. Bookmark the permalink.

43 Responses to What Do You Want for Christmas?