Pizza and My Hot Sister

Posted on February 8, 2013 by stuffitellmysister

Back in December, David Harding, his brother and his cousin, Chris, created a fun little pizza challenge. PizzaBoxDrawcember was the chosen name.  Check out the post.  It’s a hoot.  In a nutshell, the challenge was: During the month of December, if you order out pizza, ask them to draw a gorilla playing dice in the lid of the pizza box.  SEE if they’ll play along.  I told you it was fun!

We first learned of the challenge from Maddie’s post, Sunday Night Pizza Bender.  Maddie had some good luck with her pizza artists.  But I think her family grew tired of pizza.

Well it just so happened that I talked to my sister, Renae, right after reading this post.  Yep, you guessed it, she was getting ready to call in a pizza.  I told her about the post, and unbeknownst to her hubby, who would be picking it up, she made her request known to the person taking the order.  Her folks rolled with it and this was their artwork: 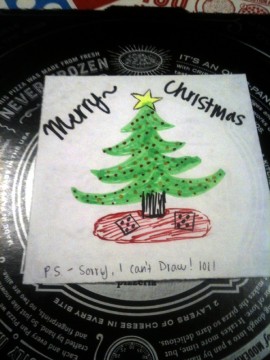 I think the gorilla must be hiding behind the tree?  Regardless, good job, Mississippi!

Towards the end of the month when hubby and I finally ordered out pizza at our local joint, hubby made the request, the order taker was willing on the phone….but it did not happen.  When hubby picked it up the guy just looked at him and said, “we don’t have time for that.”  ;(  Five dollar tip went back into the pocket.  Oklahoma disappointed.

Okay….but now the DRUMROLL PLEASE!!!!!  Parumpapumpum….after a very close vote and a LOT of banter……The above drawing was declared the winner.  Yesterday I was on the phone with Renae when a package arrived via airmail to her.  She was so excited! I remained on the phone in great anticipation while she opened her prize….TAH DAH!!!!

This depicts Renae looking “hot” on a treadmill. Outstanding job David Harding and cousin Chris! And thanks ~  We look forward to the next “Pizza Draw Whatever Month”!!

11 Responses to Pizza and My Hot Sister