Posted on September 25, 2014 by stuffitellmysister

Hubby and I have been on the road this week.  Yesterday, I received a head’s up from my forever friend, Julie, telling me about Perry Newburn. He would be attempting to run from New York City to Los Angeles in 46 days, while celebrating his 60th birthday and breaking a record.

Imagine our delight and surprise, while traveling route 60 from Missouri to Oklahoma, in seeing an orange dot moving along the road.  “There he is!” Down went hubby’s window as we yelled, GO PERRY GO!  But that just wasn’t enough.  I had to have pics and meet him.  The next few minutes we visited with Perry and his Missouri running friend, as he shared a bit about his journey. 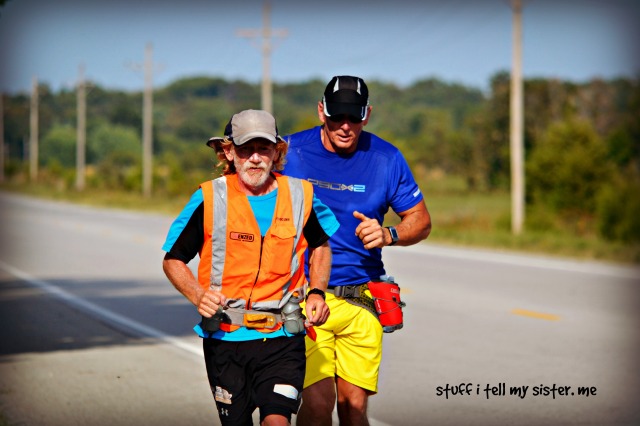 We found Perry Newburn to be a true inspiration.  His feet traveled 66 miles on this particular day.  His determination…..amazing.

We had stopped to cheer him on, but he encouraged us when he spoke of the kindness he’d met along the way.  If you have doubts about humanity, do this.  It will renew your hope. Perry told us this just before parting ways. 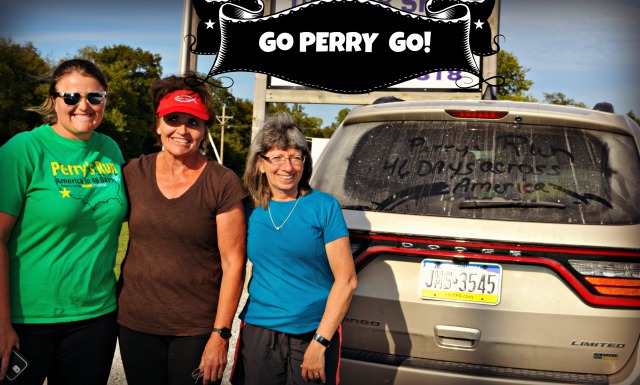 Three miles down the road, we found his dedicated driver and organizer, Ms. Angie and more support friends. (aka…Angie’s mom!)

Wanna follow Perry’s Run?  Maybe even meet him along the way and run a bit?  Follow him at Perry’s Run.  America in 46 Days or Moon Joggers.  (If you happen to be in the Tulsa area on September 26?  He will begin around 4 a.m. He welcomes and appreciates the company)

GO PERRY GO!  and HAPPY BIRTHDAY TO YOU!

This entry was posted in Uncategorized and tagged America in 46 days, Go Perry Go, moonjoggers, Perry Newburn, Perry's Run, Route 60, Running for a cause, vacation surprises. Bookmark the permalink.